It’s because I love them so much that I cringe inwardly when I receive one as a gift. It makes me sad to think that the pretty little plant will soon be a dried up little dead thing. I don’t have the green thumb to match my love of greenery. I even once bought a book called 37 Houseplants Even You Can’t Kill. Yeah… it didn’t help.

But there is one hardy little houseplant that even I haven’t killed: my philodendron. In fact, I once left the poor thing in the back of a moving truck for three days. When we opened up the truck, the plant only had four sad leaves left. But it liked the south-facing window in our San Diego apartment, and after a few months it had grown long vines. Someone told me to snip the ends and put them in water, wait until new roots grew, and add the new shoots back to the pot. Fourteen years later, not only is that same plant still living (miracle of miracles!), I now have four happy philodendron pots with several plants in each. 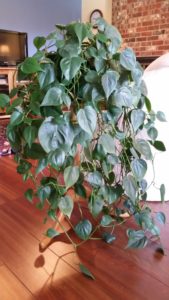 That’s what I call growth.

Growth is one of the seven characteristics of a living thing. My daughter, Adessa, once said, “I grow every single day—you just can’t see it!” As adults, we sometimes forget that we grow. Because we are no longer getting taller we lose sight of how our bodies and our brains are developing and renewing every day. In fact, we call ourselves “grown ups,” as if the growing is all done.

We like to pretend that who we were yesterday is exactly who we are today and we get really uppity when someone (like a nonverbal communication coach) asks us to stretch outside our comfort zones. We make up all sorts of excuses as to why we can’t grow. We accuse people of trying to change us. But there’s more to you than you think.

“This is just who I am,” a man in a recent coaching session said. “People may not like it, but it’s me. I could try to do things to make people like me better, but it wouldn’t be ‘me.’” 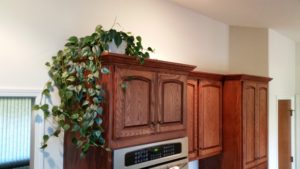 Kids are another great example—when my babies were each born, they were hardwired with genetic code that would determine many aspects of their personalities and their looks. Over the years, they have grown and changed, but who they are is still who they were when they were born. But now they’re bigger and stronger, they look differently, they act differently, and various aspects of their nature are starting to be seen with greater clarity as they mature.

If you are given the things you need to grow—in the case of my plant, water and light; in your case, feedback and instruction—you owe it to the world to make use of it and GROW. And yes, you might look a little different on the other side of that process, but you will still be YOU.

If you are alive (which I assume you are if you’re, uh, reading this), you have the power to grow—not only to grow, but to flourish. No one else on the planet has the same combinations of gifts, strengths, lovable quirks, and aptitudes that you do. Develop those so you can be the biggest, boldest, most powerful version of yourself you can be. Take in the nourishment. Get bigger and stronger. Spread out. Reach.