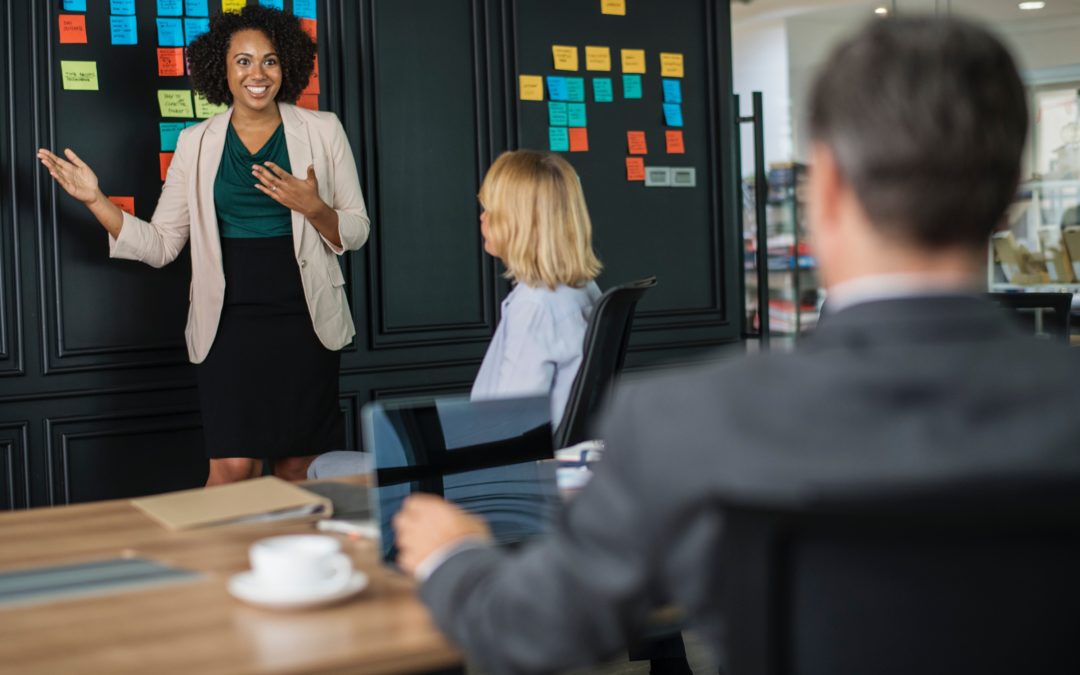 One key ingredient for personal presence, as well as excellent public speaking skills, is the ability to claim space. When you claim space, you expand your awareness beyond your own personal space bubble, fill the area around you with your presence, and open yourself up for connection. It’s like a big, nonverbal invitation: “Come one, come all! I am here, now.”

Sometimes, when I introduce this concept in workshops or coaching sessions, I’ll get this question: “Well, I’m a big guy. How do I do this without being intimidating?”

So far, only “guys” have asked the question, but the concept of overstepping boundaries is not exclusive to men. A friend recently told me about a meeting in which the presenter, a woman, made increasingly large gestures as she spoke. The man seated next to her began leaning farther and farther away from her. Not only did she continue gesturing in his personal space, but she began touching him. Finally, he told her, “Don’t ever touch me again.”

Wow. You definitely don’t want to do that.

So how DO you claim space—a huge space that includes everyone in the group and perhaps beyond it, too—without overstepping boundaries or intimidating people?

You must understand and respect the difference between public space and personal space.

You can claim an enormous “public” space without encroaching on anyone else’s personal space, even if another person happens to be near you. Consider a speaker at an event that is walking among the audience. Even though he or she may get relatively close to individuals, this is usually perfectly acceptable. Yet it is also possible to make someone feel like their personal space has been violated from across the room. What’s the difference?

Here are some ways in which claiming space looks and feels different than invading someone’s personal space:

Here are some tips to help you claim space in a way that provides safety for others.

Whenever you want to claim a large space, keep that entire space and all its occupants in mind at all times. If you fixate on one individual—either the one that interacts the most with you, or the one that you sense opposition from—your space will constrict. Soon, the interaction becomes one-on-one with spectators, instead of two members of a group having a conversation within it. See the difference?

One time, I observed a teacher in a graduate class who had a particularly engaged student. After the class, the teacher said, “I love the questions and comments I get from this student, but often it feels like the class is turning into an exclusive conversation between her and I. How do I fix that?”

Here’s what you do: walk away from the individual. Yup, walk away. Maintain eye contact, but instead of leaning or walking toward the person you’re interacting with, step back so that you keep the entire group in view and in mind. This is hard to do! It goes against your nature. I have yet to master this one myself in workshops (though I’m getting better!). But if you close the gap between you and the other person, you are no long dealing with group space. You’re in personal space land. Your presence has shrunk, you’ve lost your connection to the group, and you risk overstepping boundaries.

Stand back. Claiming space doesn’t mean taking it for yourself. It means you open up your sense of space to include others… from a distance, if necessary.

If you’re a tall person, and you’re standing very close to a shorter person, he or she has no choice but to tilt the head back in order to make eye contact. The difference in height is magnified. And yes, that can be intimidating. If you take a step back, perspective shifts. The height difference means less. It’s easier to “see eye to eye,” physically speaking.

The bigger you are, the more space you need. (Duh.) But I don’t just mean that your body actually takes up more space. The people around you need more space, too, so that you can gesture and make eye contact comfortably. Allow enough space for your whole body and its movement, not just your height.

Certainly, one way to help you claim space is through nonverbals: stand tall, in an authoritative position, with open body language, and use big gestures. But what if space is limited? What if there is someone right next to you and if you use big gestures you’ll be waving your hand right in their face? (I have seen this happen many times at dinner parties.)

Instead of claiming space physically, claim it conceptually. Claim space by expanding your awareness and your energy. A monk can sit quietly cross-legged on a stage in a gigantic auditorium full of people… and claim all that space without noise or big movements. You can, too. Focus your attention beyond your own self and your sense of space will expand. You don’t need to get in anyone’s personal space to do it.

As Amy Cuddy says, don’t just claim physical space. Claim temporal space, too. Be willing to take up some time, and that will expand your presence. Use pauses and speak deliberately. This adds weight to your words and your presence, without intruding on anyone.

Avoid touching people. There are exceptions, of course. But generally, if you’re in a group setting, touching one individual takes you out of “group space” and plops you right in their “personal space.” It sends a message to the whole group.

And if you do touch someone and you get the teensiest, tiniest, slightest indication of discomfort—tension, pulling back, stiffness, holding breath—STOP. No matter how trivial the nonverbal signal may be, stop immediately and don’t do it again! Do not impose yourself on someone else when they’ve given you a signal that the touch is unwelcome.

The point of claiming space is not to feed your ego or lord it over others. The point is to create a safe, solid environment in which communication can occur. If you overstep bounds, it doesn’t matter how much space you claim. You’ve destroyed the sense of safety. You’ll come across as oppressive and obnoxious, instead of strong and grounded.

This 12-page PDF includes tips on how to prepare yourself for an interview both mentally and physically, how to stay calm and focused during the interview, and how to communicate competence. When you enter your name and email address, a link to the file will be emailed directly to you. Ace your next interview!