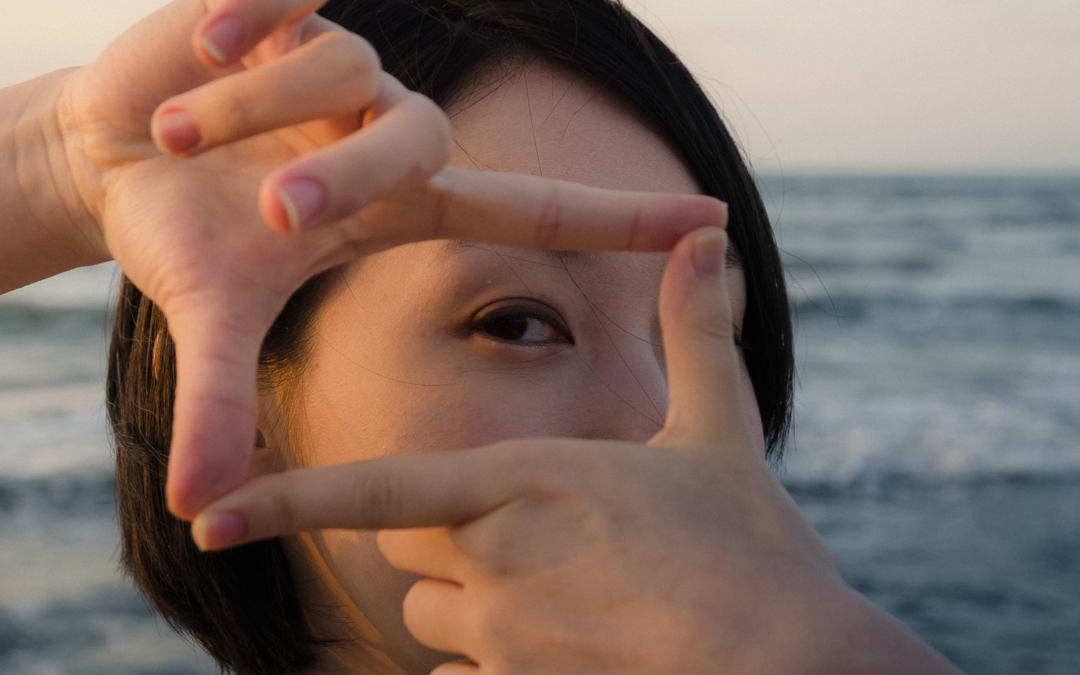 Once, back in the days when we were still having in-person presentations, a client hired me to observe her deliver a speech and provide feedback. As she stood up to speak at the event, the heel of her shoe caught on the hem of her pant leg. For a horrifying split-second she wobbled. Then, the hem tore, freeing her foot. Phew!

No biggie! She didn’t fall or hurt herself. Most of the people present hadn’t even noticed. Almost no one could see the torn hem from where they sat.

But the client could not let it go. She tried to collect herself and proceed with the speech, but her attention was fixed below her. She kept glancing down at the hem, trailing on the floor. She communicated distraction throughout the presentation with her darting eyes, her voice that stumbled over words, and her sense of space that shrunk down to include only herself.

I get it. I’ve seen it happen a million times and have done it myself. Clothing issues, technical problems, unexpected questions, changes in the environment, or any number of other details—good or bad, large or small—can wholly absorb your attention. But that just creates more problems. Instead of fixating, you need to focus.

“Focus” comes from a Latin word that originally meant hearth or fireplace. It was the center of activity in a home and the place from which light and heat emanated. When you focus, you bring your attention to a specific point, but not to the exclusion of everything else. While the peripherals may be blurry, they are still in your field of vision and contribute to the whole picture.

To fixate is to be “fixed”—stuck and unmoving. It implies constant, complete, obsessive, and perhaps even unhealthy attention. Even when what you’re obsessing over is a positive thing, it becomes negative when it takes your time, attention, and energy away from other things you need to be aware of, from your focus.

When it comes to communication, here are some ways I’ve noticed that people tend to fixate:

When someone asks a question in a group, many presenters move toward the person and answer directly. This turns the group into eavesdroppers of a private conversation. Instead, listen to the question, but direct your answer to the entire group. Include them in your response. Broaden your scope.

In working with coaching clients, I’ve discovered how hypersensitive people can be to a single nonverbal cue. I’ll hear about how a coworker or employee furrowed their brow or crossed their arms, and it led to thoughts that snowballed out of control. Instead of taking the “negative” body language in context, it became the only thing they could think about. Focus on the whole person instead of fixating on one nonverbal behavior.

Managing conflict or “difficult” people can also become a fixation. Don’t let a single person drain you of all your time and mental energy, especially if it’s distracting you from others on the team. Maintain focus on the whole team.

Perhaps the easiest person to be preoccupied with is your own self. I’ve noticed people who try so hard to make a good impression that they aren’t present with the people they’re trying to impress! Another example: when people hear I do presentations on nonverbal communication, they freeze and their attention shifts to their own bodies, wondering, “What am I inadvertently communicating? What am I doing wrong?” until they realize that I am just a normal human being who is not analyzing their every blink and twitch. Be aware of yourself AND the others you are with.

And of course, mistakes and errors can be a huge source of “stuckness,” too. I’ve gotten better at moving past them when I’m presenting, but I still struggle with this when I’m playing piano in front of people: one wrong note and my brain can’t move forward. Of course, that just leads to more mistakes! The same holds true any time you’re in front of people. The mistake is one point in time. Let it live in light of the entire interaction or performance.

You can probably think of many more examples than the ones I’ve listed here. In every case, one element of the overall experience becomes disproportionately weighted until everything else goes unnoticed. When you’re leading—leading a group, an audience, a conversation, or your own life—you have to keep the big picture, including your entire audience or group, in mind.

Expanding your sense of space is a skill you can practice. In fact, right now, as you read, you can focus on these words while allowing your awareness to expand beyond them. What’s behind the screen? What’s behind you? What’s under your feet? What sounds are in the background? You can still focus while taking ALL that in. Your brain is truly amazing.

To avoid fixating, YOU have to be as big as your group, as big as your presentation, as big as your project. You do that by claiming space: literal space around you, space in time, and space in terms of scope. Then all the details, surprises, mistakes, irritations, and everything else that you might otherwise fixate on are put into context. You are bigger than you think. Claim that space.

In this free 22-page PDF guide, you will learn the four components of Presence and how to communicate leadership in each area. It's chockful of tips, exercises, and practical tools that you can use to communicate your vision and values with authority, confidence and power. Enter your name and address and a link will be emailed directly to you.